A Short Guide to Pronouns Part 1: What They Are and How to Use Them 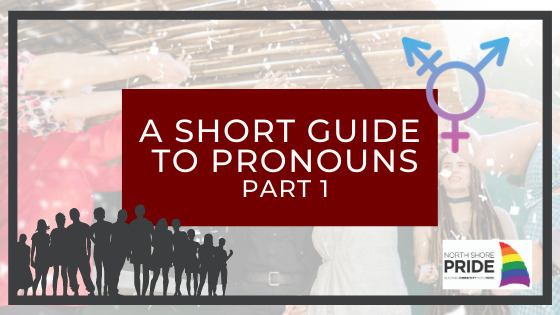 Click here to read “A Short Guide To Pronouns Part 2: Allyship, Misgendering, And Why It’s Ok To Make Mistakes”

If readers have any questions about the material covered in these posts they should feel free to reach out to North Shore Pride at info@northshorepride.org for additional resources and answers. No questions are dumb questions!

Last week the North Shore Pride Blog centered on the Transgender experience, defining terms and drawing attention to some of the more common myths about Transgender individuals. Click here to read “The T in LGBTQ Stands for Transgender.”

This week, the focus will be on pronouns, specifically what they are and how they are used.

The basics of good allyship when it comes to pronouns, what it means to “misgender” someone, and what to do if you make a mistake will be explained next week in part 2.

A Primer on Pronouns

NBC News released an article yesterday declaring that 1 in 4 LGBTQ+ youths use non-binary1 pronouns. The study determined that “They/them” is the most popular non-binary option, but 4 percent of those surveyed report using other, lesser known pronouns like e/em and ze/zir.

But what does this even mean? Well, let’s break it down.

“My sister, she told me this morning…”

“My husband when he came home yesterday…”

“The Jacksons are traveling to Chicago next week, they are planning to take the dog…”

The pronouns – she, he, and they respectively – refer to the human(s) doing the thing in the sentence. Pronouns exist because it can be tedious referring to someone’s name whenever you’re talking about them. For example, it would be strange for someone to say something like this: “Janice was feeding Janice’s cat yesterday when Janice heard a knock at the door.”

But many LGBTQ+ individuals no longer feel represented by traditional she/her or he/him individual pronouns. There are many reasons for this, but one of the more common reasons is that for someone whose gender is non-binary, being referred to as “she” or “he” when they don’t identify as male or female just isn’t correct.

English has evolved to include additional pronouns3 including:

Because of this, when meeting someone new, it’s important to ask someone what their pronouns are. This is one of the basics of good allyship which the Blog will cover in more detail next week in A Short Guide to Pronouns Part 2: Allyship, Misgendering, and Making Mistakes.

1 – A Non-binary person is an individual who doesn’t fall under the binary model of gender. To read more about gender identities, check out “The T in LGBTQ stands for Transgender.”

3 – The Oxford English Dictionary traces the origin of the singular “they” back to the 14th century, but while that’s technically true, the widespread usage of the “they” to describe a single person who doesn’t use she/her or he/him pronouns is much more recent.

9 ways to be a better LGBTQ+ ally – Vogue

← Orientations and Identities: The T in LGBTQ stands for Transgender
→ A Short Guide to Pronouns Part 2: Allyship, Misgendering, and Why It’s Ok to Make Mistakes
Tags: identities, lgbtq, pronouns

4 comments on “A Short Guide to Pronouns Part 1: What They Are and How to Use Them”