A Short Guide to Pronouns Part 2: Allyship, Misgendering, and Why It’s Ok to Make Mistakes 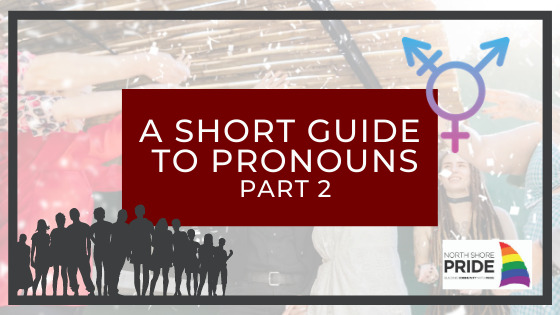 Click here to read “A Short Guide To Pronouns Part 1: What They Are and How to Use Them

If readers have any questions about the material covered in these posts they should feel free to reach out to North Shore Pride at info@northshorepride.org for additional resources and answers. No questions are dumb questions!

This is part two of a two part series about Pronouns, and this week the focus will be on how to be a good ally, what it means to “misgender” someone, and what to do if a mistake is made (everyone makes mistakes!)

Click here to read last week’s post A Short Guide to Pronouns Part 1: What They Are and How to Use Them.

Basics of Good Allyship When it Comes to Pronouns

Most people who read this may not yet have a complete understanding of what it means to use pronouns other than she/her or he/him when referring to individuals. This is ok, everyone needs to start somewhere. In fact, wanting to learn and be supportive of people who use non-traditional pronouns is one of the first steps towards LGBTQ+ allyship.

Other ways to be an ally in terms of pronoun usage include:

What it means to “Misgender” someone

Misgendering occurs when someone assumes the gender of someone and gets it wrong, which is something that happens frequently for LGBTQ+ individuals.

For example, take the case of Janet (she/her) and Sam (they/them):

Janet is introducing Sam to Janet’s colleague Max. “I met Sam when she and I were assigned to the development team.”

Since Sam doesn’t use she/her pronouns, Janet just misgendered Sam. It may seem small to someone who doesn’t use non-traditional pronouns, but for someone who does, it can be really disheartening. For someone who is transgender, nonbinary, or gender nonconforming, using the correct pronoun to describe their gender identity is an important step in their journey of self-acceptance.

Good allies recognize this, and work hard to help affirm a person’s gender identity by using the correct pronoun for them.

One thing LGBTQ+ individuals impress upon allies is that it’s ok to make mistakes when it comes to pronoun usage. The important thing is that allies try to correct those mistakes and continue to use the right pronouns. Like everything else, practice makes perfect.

There’s also something important to mention. Consider the following scenario with Janet and Sam.

Janet to her colleague Max:  “I met Sam when she and I were assigned to the development team.” then Janet turns to Sam. “Them, I mean I met them when she, I mean they, I’m so bad at this I’m so sorry I’m really trying I promise.”

This scenario happens regularly between allies who are learning to use non-traditional pronouns and individuals who use those pronouns. This overcorrection can be embarrassing for both parties, so here’s a helpful solution.

Here is a better way for Janet to have done this:

Janet:  “I met Sam when she, I mean they, and I were assigned to the development team.”

Max, to Sam: “Nice to meet you Sam, I also use they/them pronouns. I’m looking forward to working with you!”

This way not only lets Sam know that their pronouns matter to Janet, who is doing a good job at being an ally, and also opened the door for Max who also uses non-traditional pronouns to be affirmed in their workplace. It’s a win-win-win.

Next week on the Blog the focus will be on Allyship as a whole, and what allies can do to support their LGBTQ+ friends, family, and colleagues with their words and actions.

← A Short Guide to Pronouns Part 1: What They Are and How to Use Them
→ How to Be a Good LGBTQ+ Ally: An Introduction

19 comments on “A Short Guide to Pronouns Part 2: Allyship, Misgendering, and Why It’s Ok to Make Mistakes”