Orientations and Identities: The T in LGBTQ stands for Transgender 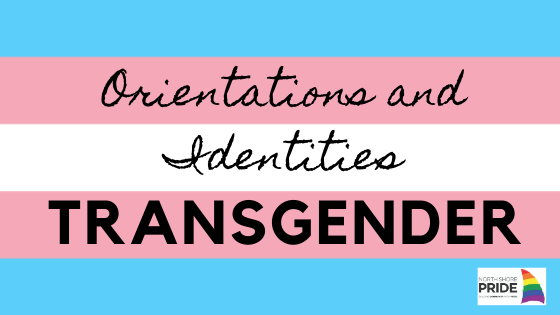 Please join us on Thursday, August 27 for the North Shore Pride Community Forum: Violence Against the Transgender Community. 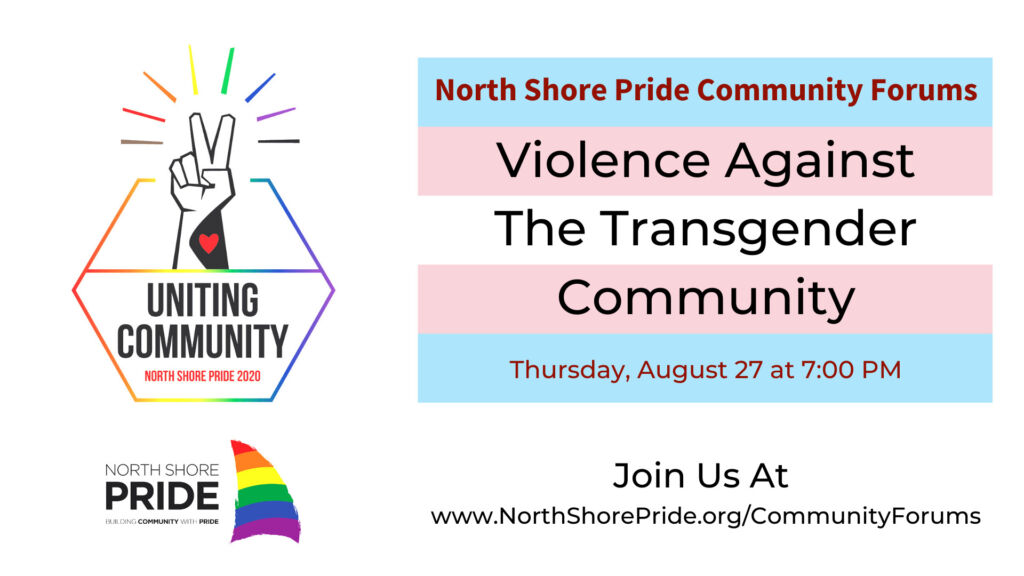 The LGBTQ+ acronym is by no means a comprehensive term, but it operates as an umbrella for all orientations and identities that imply that a person isn’t strictly heteronormative or straight.

But while the L, the G, and the B – which stand for Lesbian, Gay, and Bisexual respectively – are orientations, the T in the acronym is a gender identiy.

It stands for Transgender.

Transgender is also an umbrella term that means that a person’s gender identity differs from the biological gender that they were assigned at birth.

For example, if a person was assigned the biological gender of female at birth, but have a defined gender identity or expression that isn’t traditionally female, then that person is Transgender.

This is why it’s important to always ask people what their pronouns are upon first meeting. It’s impolite to assume someone’s gender, and asking them up front just prevents any possible misgendering that could occur.

Some genders and gender expressions on the Transgender spectrum are:

Important note –  when describing Transgender individuals, never say that a person is “Transgendered” or “A Transgender” – it’s like referring to someone as “gayed” (like it was an act done to them) or “a gay” (which is just mean).

This is a lot to keep track of, so let’s break it down.

A biological gender (sex) is the gender the doctor/parent/midwife determined when a person was born. An important detail to mention is that recent studies have debunked the idea that humans only have two biological genders. Read this study by the World Health Organization or watch this documentary by the BBC called Me, My Sex, and I.

A gender identity or expression is an individual’s gender or gender expression (it’s a complex relationship that can be different for each person) that may or may not differ from their biological gender.

Also, gender identities are not the same thing as a sexual orientation, as an orientation denotes the kinds of humans individuals are (or are not attracted to) in regards to sexual or romantic involvement.

Let’s debunk a couple of myths…

For a more comprehensive discussion of myths and misunderstandings around transgender identities, check out this video series by the HRC.

Myth: A Transgender (or Trans) individual is someone who is actively taking Hormone Replacement Therapy (HRT) in order to biologically transition.

Not necessarily. A Trans Woman may identify as a Lesbian if she/they are only attracted to women, or a Trans-man might be attracted only to women and therefore identify as straight. Since Trans women are women, and Trans men are men, and Non-binary people don’t follow a binary, a person’s orientation can often have very little to do with their gender identity and vice versa.

While many Trans individuals experience gender dysphoria, this doesn’t mean they have a mental disorder – both the American Medical Association and American Psychiatric Association agree that being transgender is not a mental disorder – and In fact, thinking along these lines can be incredibly harmful to people who are Transgender, because it assumes that a Transgender person is so because of a mental illness, which just isn’t true.

Thank you for reading The T in LGBTQ stands for Transgender. Check back each week for new posts on relevant topics.

← International Family Equality Today Celebrates LGBTQIA+ Families
→ A Short Guide to Pronouns Part 1: What They Are and How to Use Them
Tags: lgtbq, transgender

13 comments on “Orientations and Identities: The T in LGBTQ stands for Transgender”