Orientations and Identities: What does the Q in LGBTQ stand for? 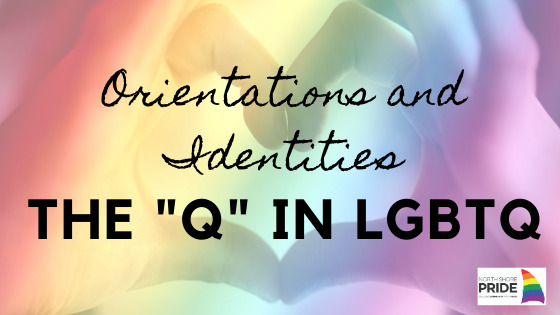 Disclaimer: The content of this post is to explain the differences in how a term is used, and does not seek to make claims one way or the other. LGBTQ+ community members have a multitude of unique experiences and it’s important to take all of these into account with thoughtfulness and empathy.

If readers have any questions about the material covered in these posts or would like to share their personal experiences, they should feel free to reach out to North Shore Pride at info@northshorepride.org for additional resources and answers.

What does the Q in LGBTQ stand for?

The word “Queer” is a complicated term that means different things to different people. For some it is a badge of pride, an umbrella term encompassing gender identities and sexual orientations that don’t fit under normal categories and labels. For others it can be offensive, as it refers to a derogatory slur that has been used in homophobic hate speech against LGBTQ+ community members.

Tolerance.org refers to the word “Queer” as both “a dagger and a hug, a dismissal and a welcome sign, a put-down and a motivation to stand up and march.”

This difficulty in terminology leads many to ask what does the Q in LGBTQ actually stand for? For many, it’s “questioning,” for others, it’s “queer.” According to Fred Sainz a spokesman for the Human Rights Campaign, the answer is both.

Defining “Queer” Along a Generational Divide

In 2019, NPR wrote an article about this divide, which appears to be predominately generational in nature, in regards to how the word Queer is either accepted or rejected by LGBTQ+ community members.

In the article, NPR’s standards and practices editor Mark Memmott argues that while it’s important to take the historical usage of a word into account when making publication decisions, it’s also important to recognize that language can evolve.

“For many people, it’s still a difficult word to hear or read because of the past history. But language evolves. Words evolve. And we wanted to reflect that we do change as the language changes,” said Memmott.

There is a history in previously marginalized communities of reclaiming terminologies that were used against them in an effort to de-emphasize their weight. The logic behind this is if the word is reclaimed positively, it can’t be used against the individual who has reclaimed it.

Basically, reclaiming slurs can be a tool of resisting oppression.

But having that said, this doesn’t change the fact that even with this reclamation, hate speech is immensely harmful to those who are subjected to it. When new words are adopted into the LGBTQ+ lexicon, it’s important to take time to realize that they won’t be immediately understood or accepted by all members of the community for their new meanings.

And, in return, older generations can recognize that younger LGBTQ+ are able to reclaim terms and express themselves more openly because the world is a slightly less hostile place than it used to be.

The LGBTQ+ community is stronger together, and having conversations about identities, orientations, and new ideas can help the community flourish.

206 comments on “Orientations and Identities: What does the Q in LGBTQ stand for?”