Wear Pink and Stand Up to Bullying 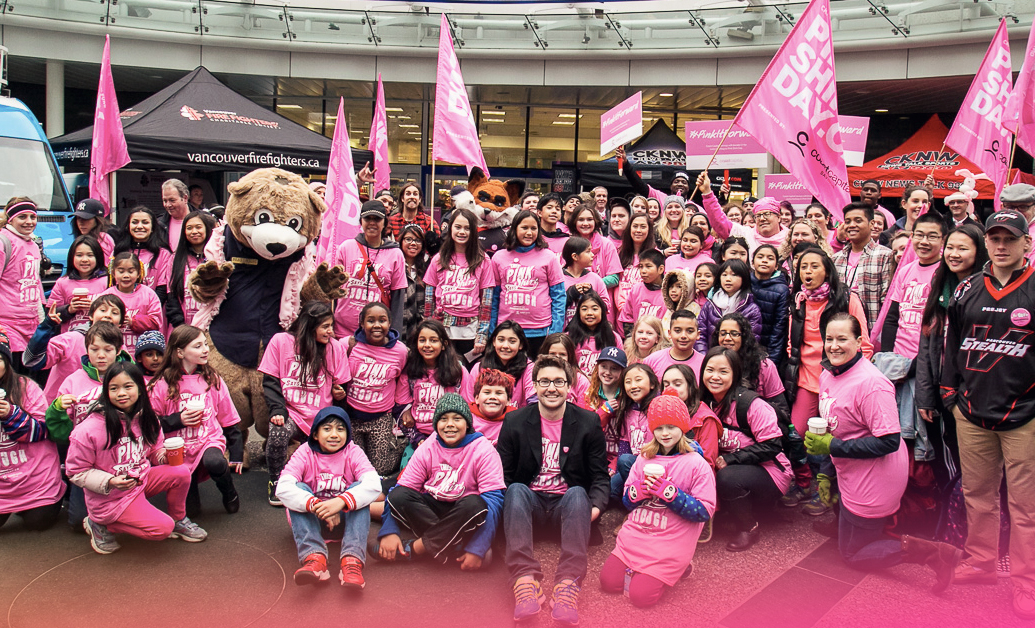 Photo Caption: Students and Youth Leaders gather in Nova Scotia to Stand Up to Bullying on Pink Shirt Day

On February 26, 2020* youth organizations all over the world will be wearing pink shirts, standing in solidarity with those who are victims of bullying in schools in the United States, Canada, and across the globe.

When a group of students were harassing 9th grader Chuck McNeill who showed up on the first day wearing a pink polo shirt, calling McNeill a homosexual and threatening to beat him up, Shepherd and Price decided that they would do something to keep this from happening. They went to a local thrift store and bought all the pink shirts the store had on hand.

Armed with pink fabric, Shepherd and Price sent out an email blast to their classmates encouraging them to wear pink and offering shirts to anyone who didn’t have one. The next day, McNeil was greeted by a sea of pink at the school, proving to him and to all who witnessed the movement that the school would stand behind anyone who was the victim of bullying.

McNeil wasn’t bothered again after that.

The movement gained international recognition when LGBTQ+ celebrity icon Ellen Degeneres heard about the event and shared it with her fans.

Stand Up to Bullying on Pink Shirt Day

In June of 2010, the World Health Organization referred to bullying a “major health problem” that demands “the concerted and coordinated time and attention of health-care providers, policy-makers, and families.”

Bullying occurs when a person or group aims to scare or harm an individual repeatedly. Forms of this include (but are not limited to) name-calling, inflicting physical pain, public humiliation, threatening behavior, withholding resources, and vandalism.

Everyone can make a stand against bullying, no matter if you’re 6 or 60. For Pink Shirt Day at the end of February, here are some things you can do especially to show your solidarity:

Because the issue is so prevalent, there are several anti-bullying events throughout the year. Here are a few:

International Day Against Homophobia, Transphobia, And Biphobia – May 17, 2020

* Some organizations mark the day in February as the last Friday, the 28th – but the official organization – Pinkshirtday.ca – the event will be held on the last Wednesday in February, the 26th. There is also an additional Day of Pink held each year on April 8th.

5 comments on “Wear Pink and Stand Up to Bullying”